Victoria Nile: The majestic Lake Victoria was thought for after a very long time to be the source of the Nile. It is in a sense. Waters from the large lake leave by the Victoria Nile to head north to join the Albert Nile in northern Uganda. The Victoria Nile starts at the outlet of Lake Victoria, at Jinja, Uganda, on the northern shore of the lake. Downstream from the Nalubaale Power Station and the Kiira Power Station at the outlet of the lake, the river goes over Bujagali Falls (the location of the Bujagali Power Station) about 15 kilometres (9.3 mi) downstream from Jinja town. The river then flows northwest through Uganda to Lake Kyoga in the centre of the country, thence west to Lake Albert.

Murchison falls Wildlife: Murchison falls National Park remains one of the ancient savannah that is inhabited by hundreds of Wildlfie species, From the adjacent Bugondo Forest Reserve that habours over 76 species of mammals, to the Uganda’s largest population of Nile crocodiles. Then, the 450 bird species present ranging from easy variety of waterbirds, including the rare shoe-billed stork, Budongo’s 59 “restricted range” species, dwarf kingfisher, Goliath heron, white-thighed hornbill and great blue turaco (an ideal destination for bird lovers)

Murchison Falls, also known as Kabalega Falls, is a waterfall between Lake Kyoga and Lake Albert on the Victoria Nile River in Uganda. At the top of Murchison Falls, the Nile forces its way through a gap in the rocks, only 7 metres (23 ft) wide, and tumbles 43 metres (141 ft), before flowing westward into Lake Albert. The outlet of Lake Victoria sends around 300 cubic meters per second (11,000 ft³/s) of water over the falls, squeezed into a gorge less than ten metres (30 ft) wide. 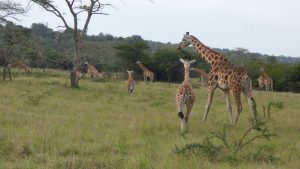 Murchison falls National Park is one of most visited Uganda Safari destinations, and an…